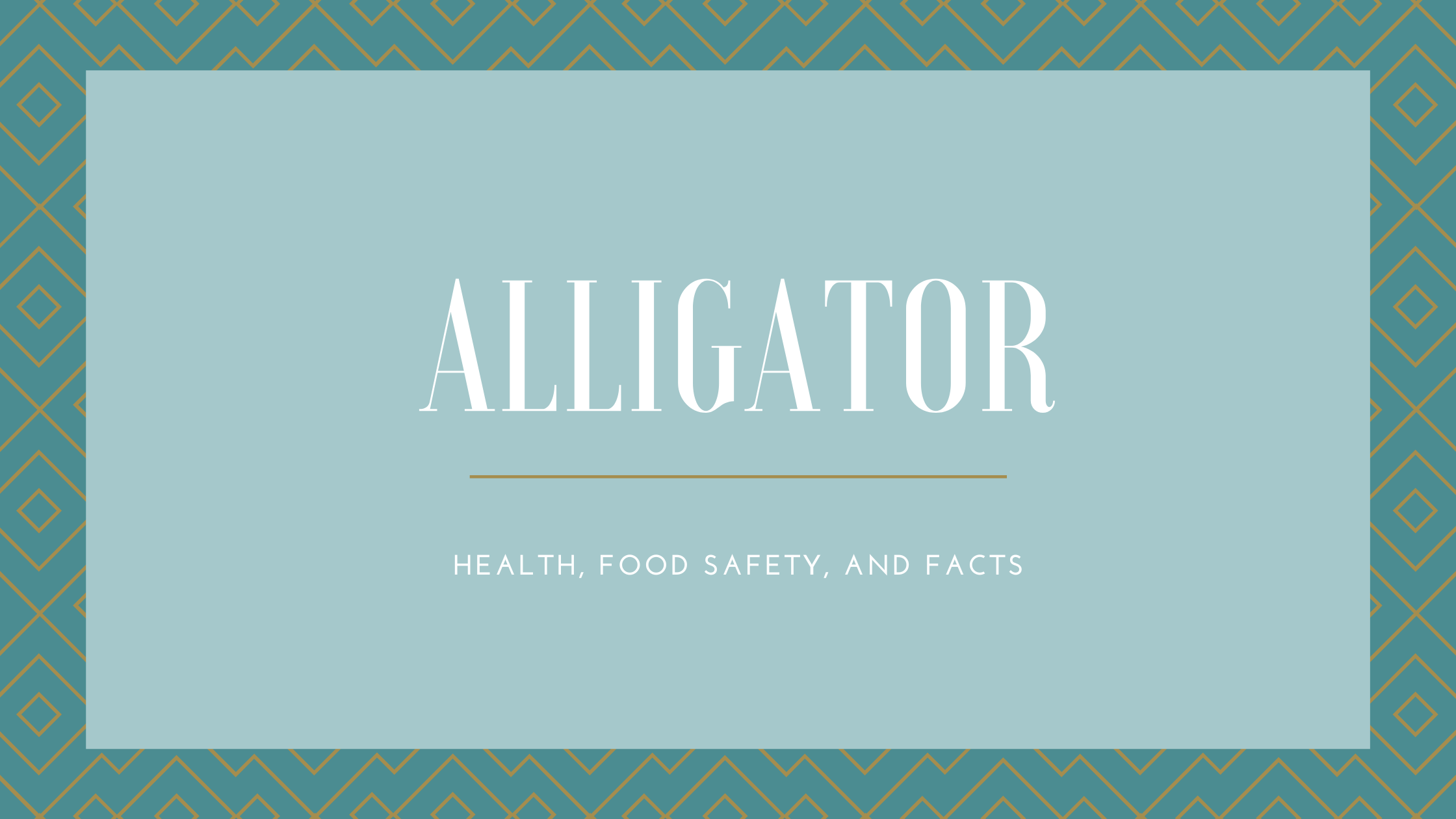 The first alligator sightings in Louisiana were recorded by early French settlers who saw the scaley reptiles in the waters of Bayou Manchac in 1699 after establishing the Louisiana colony. In fact, the Riviere aux Chenes (Oak River) in St. Bernard Parish was originally called the Riviere-aux-Chiens after the settlers made note of a crocodile eating one of their dogs. By the early 1800s settlers and native Americans soon learned the value of the alligators’ hides and meat.

Over the centuries alligators became hunted extensively and by the 1960s, they were considered endangered, and became protected from 1962-1972. During this period, populations increased quickly; and have continued an upward trend due to a highly-regulated management program established in 1970 and a conservation alliance between wildlife agencies, alligator farmers and hunters.

Here in Louisiana, you can find alligators in bayous, lakes and even ponds that are close to natural waterways; but the highest concentration are found in the coastal wetlands. They can tolerate brackish and salt marshes for short periods of time, before heading to fresh and low-salinity marshes.

If you’ve ever wondered the difference between a crocodile and an alligator – or if there even is a difference – there is. One of the easiest ways to distinguish between the two is that alligators have large, broad U-shaped snouts, and crocodiles always have pointed, V-shaped snouts. Plus, you’ll only find a crocodile at the southern tip of Florida, where the waters are warmer.

Mark Shirley, Fisheries Agent for Vermilion Parish LSU AgCenter says 90 percent of the gators harvested in Louisiana will ultimately be purchased as quality leather goods in the Far East or Europe. Less than 10 percent of the goods will find their way back to U.S. markets. In a 2019 survey of economic contributions of the alligator industry to the Louisiana economy, the direct value of skins was estimated between $80 and $100 million.

We’re currently in the harvest season for alligators: September through October.

Farmers most often acquire eggs through the practice of “egg ranching,” (the collection o alligator eggs from the wild) which is more economical and successful than captive breeding, and it allows alligator farmers to acquire the necessary stock to produce hides and meat.

Alligators breed in late May to early June, laying an average of 30 eggs a week after breeding. Incubation takes 65 days. Interestingly, a researcher at Rockefeller Wildlife Refuge discovered in the early 80s that the incubation temperature determines the sex of the developing embryo.

To assure that the wild alligator population is not depleted from egg ranching, the Louisiana Department of Wildlife and Fisheries (LDWF) requires that farmers return juvenile alligators from 10 percent of the eggs hatched to the same area where the eggs were originally harvested within two years. Prior to their release, each juvenile is measured, sexed, tail-notched, tagged and recorded. In 2019, LDWF reported that farmers released a total of 38,598 farm-raised alligators into the wild. Also that year, LDWF recorded 2,861 hunters as having harvested 23,828 wild alligators and 438,577 farm-raised alligators.

It might surprise many to know that alligator meat must be processed in a licensed facility approved by the Louisiana Department of Health and Hospitals. Like any other seafood commodity, it is governed by the Food and Drug Administration.

Furthermore, alligator is a great healthy meat alternative. A nutritional analysis performed by LSU AgCenter’s Experiment Station showed the reptile to be high in protein and very low in calories, fat, saturated fat and cholesterol. It is also a good source of omega-3 fatty acids, which protect against heart disease.

The taste has been described as a cross between white-flesh fish and frog legs. Some say the texture is similar to veal, while others describe it more like rabbit. The taste and texture depend on the cut of meat and how it’s prepared.

-The most tender part of the alligator is in the tail, where the white tenderloin meat is found. This meat, along with the jaw cuts, are best basked, fried and grilled.

-The ribs are delicious covered with foil and braised in the oven, or put in a smoker or on the grill.

-Body and leg meat are more muscular and should be tenderized a day or two in advance.

-Whichever part of the gator you cook, don’t overcook it or it will be tough.

-Cut across the grain of the meat for increased tenderness.

-Remove any fat before preparation or freezing.

-The meat can be frozen for up to a year without compromising quality.

By Steaks and Game

If you’ve eaten sushi, you’re probably familiar with the word “ahi” (ah-he) which is the Hawaiian name for this month’s featured fish:  yellowfin tuna. One of the 15 types of tuna, yellowfin makes delicious eating and is a challenge to catch, which is why it is one of the most popular among all fish wranglers. According to researchers, more yellowfin tuna is landed both, recreationally and commercially, from ports in Louisiana than from any other Gulf coast state. Venice, La, is referred to as the Tuna Capital of the Gulf.

So what makes this fish so unique and sought after? Well for starters, it’s a stunner in appearance. The yellowfin’s torpedo-shaped body is a metallic blue-green that changes to silvery white around the belly. It is distinguished by a bright golden-yellow color on the dorsal fins, finlets, tail and along the side – hence the name.

Because they are warm blooded, tunas have amazing strength and speed, capable of going from zero to 40 miles per hour in seconds. They feed on a variety of fish including anchovy, mackerel, cuttlefish, squid, shrimp, octopus, larvae stages of lobster and crabs and – because of their size- other tuna.  Often traveling in schools, yellowfin prefer warm waters. Their lifespan is only six to seven years, but the females reproduce millions of microscopic-size eggs almost daily.

The yellowfin sold by Delcambre Direct Seafood come from Jensen Tuna out of Houma, LA. From there, fishermen venture into the very deep waters of the Gulf to pull in 80 to 90 pounders.

Yellowfin tuna is low in cholesterol and calories (A 3-oz. filet has 93 calories) and high in niacin (Vitamin B3), and Vitamin B12. Packed with protein, this fish is also low in saturated fat and sodium. It is a good source of magnesium, phosphorus, potassium, and a very good source of Vitamin B6, selenium, Vitamin-E, thiamin and riboflavin.

While some varieties of tuna have higher mercury levels because of their expansive diet, the Food and Drug Administration categorizes yellowfin as a “good choice.” The recommendation consumption is one 4-ounce serving per week.

When buying tuna, you should look for a bright red color and firm texture. The raw meat should never be brown or pinkish.

Because ahi tuna tends to dry out quickly, it’s best to store it in an air-sealed container, on the bottom shelf of your refrigerator.

Fresh tuna should be eaten within two days of purchase, or it can be kept frozen for up to 3 months.

Because of its firm texture, tuna can be prepared many different ways, but it is best pan seared or grilled. The most important thing to remember is not to overcook it. Fully-cooked tuna tends to be dry and tough. To appreciate the unique mild taste, tuna steaks are usually served seared on the outside and rare or medium rare on the inside. When it has a seasoned, crusty sear on the outside and the underdone center is melt-in-your-mouth tender, tuna can be as satisfying as a beef steak.

Pat the fish with a paper towel and set aside. Mix the soy sauce, toasted sesame oil, honey, kosher salt (OMIT salt if marinating for more than a couple hours), pepper and cayenne pepper until honey is fully dissolved. Pour over the ahi tuna steaks and turn over to coat completely. Place in large Ziplock bag and marinate for at least 10 minutes, or overnight in the refrigerator.

Add olive oil to a nonstick pan and get it sizzling hot before laying tuna filets down. Cook thick filets 2 to 3 minutes on each side and thinner ones 1 minute per side. When done, slice fish immediately to stop cooking process.  Add green onions, sesame seeds, and lime wedges. You could also drizzle some spicy mayonnaise on top and serve in a rice bowl with asparagus or broccoli.

Add the canola oil to the hot pan. Sear the tuna for 1 – 1½ minutes on each side for medium rare