In her 13 years of working as chef at Casa Ole’s Lafayette and Opelousas restaurants, Nadine Guidry never thought the salsa she made every day would be the foundation for the start of her own business. Yet since 2013, the Kaplan native has sold her popular salsa, which has evolved to other marinades, sauces, and pickled items under the label of Nadine’s Nom Nom’s (a Cajun reference to sweet treats.)

And over the years, she has developed her product line to include chili sauce, chow chow, pickled quail eggs, okra, green beans and beets, fig preserves (when in season), and chocolate sauce.

But, a little more about the star of the show. Made from 11 ingredients, the salsa has what loyal customers say is the perfect texture and a nice medium heat. “I take the seeds out of the jalapenos grown in my garden,” explains Nadine, who also grows cayenne, Tabasco and habanero peppers. When asked what singles her salsa out from the THOUSANDS on the market today, she says with a smile, “I put love in every jar.”

Like most chefs she loves to experiment, which has brought new items like the Keeya Hot Sauce, made from a combination of all her homegrown peppers. “It’s got garlic and a couple of other secret ingredients to balance the pepper,” she assures.

The Awesomesauce is a concentrated seafood velouté made with butter, flour, spices, celery, onions, bell peppers, and herbs, which makes an excellent alfredo sauce, etouffee or stew. “It makes an etouffee in 20 minutes,” adds Nadine.

Another pantry essential, Roux 4 U has all the makings for a quick gumbo or stew, but tastes like it’s been simmering slowly on the stove for hours. With the onions, bell peppers, celery, and garlic already in it, all you have to do is add stock and meat or seafood.

Because quail eggs were getting harder to come by (to pickle,) Nadine introduced, in mid-October, her Yard Bird Butt Nuggets (Don’t judge them by their name.) Already in demand, the pickled chicken eggs – fresh from her mother-in-law’s yard – have just a little more of a pepper kick than the popular pickled quail eggs.

The newest product is a de-li-cious condiment called Pig and Fig, a combination of smoked bacon, fig and other ingredients. Its uses are only limited to the imagination.

At any given time, there are about 10 cases of each product produced every month, some 120 jars. Every lid is hand sealed by Nadine in the kitchen of the home where she grew up. The subject of her kitchen immediately brings to mind the biggest influence in her life. “My mother, who died in 2016, is always looking over my shoulder. She was the best cook I ever knew; I learned from her.”

It wasn’t until she attended culinary school in Lafayette, at 25, that she would understand why her mother cooked he way she did. “Culinary school explained so many of my mother’s cooking techniques that even she couldn’t explain to me,” says Nadine, who went on to be chef at Lafayette General Medical Center and La Pizzeria before settling down at Casa Olé.

No stranger to the farmers market scene, she has traveled to Crowley, Church Point, Estherwood, Abbeville, and beyond. She started the Cajun Riveria Farmers Market at Holly Beach, one of her favorite spots. An original charter vendor of the Delcambre Seafood & Farmers Market since the beginning she recalls of the first market, “I had never been to such a large and more organized market.”

It’s not unusual to see Nadine with a puppy – or two- in tow. Since 2015, she has fostered some 150 furry friends, often taking them to markets with her. The two-time breast cancer survivor says, “I told God when I was first diagnosed that if he let me live that I would take care of homeless dogs.”
As for her other passions? The Saints (She celebrated on Bourbon Street when they won the Superbowl in 2010) and the Astros (She gets revved up just talking about Jose Altuve.)

An all-star herself, in the kitchen, Nadine says her goal is to “bring the taste of Cajun country to your pot or grill one jar at a time.” Well on her way, she’s shipped Nom-Noms to California, Oklahoma, Texas, and to cooks in other states wanting that real Cajun taste. 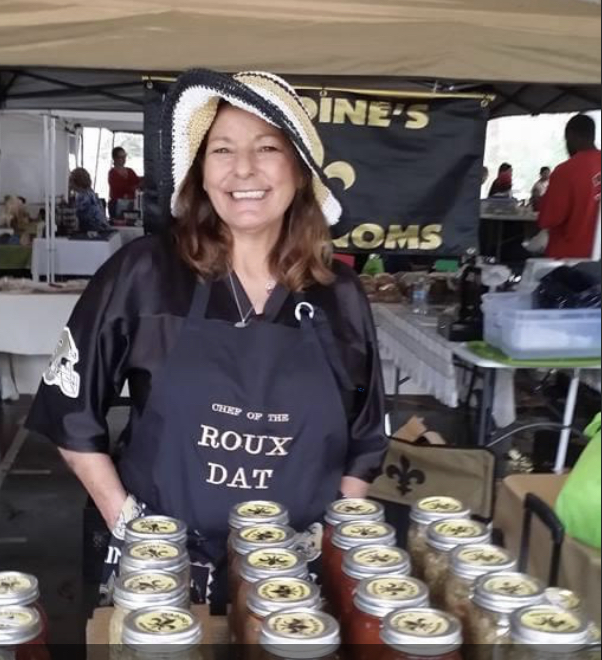 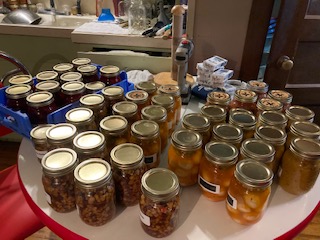