Give Thanks at the Table for 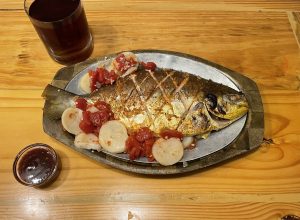 In the Gulf waters along the beaches, fall fishing means speckled trout and, with luck,

a by-catch that is lesser known outside of angling circles and the kitchens of legendary restaurants:  the pompano.  If you’ve never heard of this fish, you’re missing out on, arguably, one of the finest tasting saltwater delicacies – and one that is easy to cook.

Attractive as it is tasty, pompano is a flat silver fish with a gray/green or dark blue color at the top of its back and pale yellow on the underbelly (which turns brighter yellow after it’s caught and on ice).   NOTE:  It’s so attractive a fish, that it was one of the marine species featured on the 90-cent stamp of St. Vincent and the Grenadines in the mid-70s.

A member of the large jack family, (including amberjack) pompano is best caught during spawning in March and April near the sandbars along the Gulf’s beaches and from August through November in 10 to 25 feet of water, again, just off the beaches or often hanging out near offshore platforms.  They feed on small clams and mussels, shrimp, and smaller crustaceans, as well as small fish, which account for their naturally sweet taste.

“I’d compare them to Mahi-mahi or snapper in taste and texture,” says Bryan Mobley, owner of Corina, Corina Seafood, LLC. in Galliano, LA, a pompano supplier of Delcambre Direct Seafood.  Fresh frozen and “on the half shell,” our pompano were caught by local fishermen in Breton Sound and Chandeleur Sound on the Louisiana/Mississippi Coast, reeled in at what Mobley considers an ideal size of 12 to 14”, or about 1 ½ to 2 pounds.

Considered by chefs and restaurants as a premium fish, pompano is among the higher priced in the industry and, consequently, in restaurants.  We are happy to bring this heart-healthy source of Omega 3’s to your kitchen at a more affordable price.

So let’s talk about cooking this fish.  The thing to remember is that the meat, though firm to the touch, is finely flaked, and cooks quickly – especially when seared in a black-iron skillet.  Although they can be grilled, fried, or broiled just as well.  Whichever way you choose, pompano purists subscribe to the “less is more” rule to savor their naturally sweet, rich flavor.

A favorite example of a simple, elegant pompano dish is Pompano Pontchartrain, a hallmark on the menu at Antoine’s in New Orleans, where it has been served for over 45 years.  According to Michael Regua, who retired in 2019 as executive chef of the famed restaurant after 47 years, the secret to preparing pompano is cooking it skin side up, “so that the skin doesn’t shrivel once it hits the heat.”  Searing it this way also promotes an even crispy texture of the skin, which many love to eat.  (Remember, there are no scales.)

Chef Ragua’s Pompano Pontchartrain is an easy first-attempt at cooking this prized fish.  Don’t leave off the crabmeat, which can be gotten through DelcambreDirectSeafood.com, because royalty needs a crown – and pompano is king!

Pat fish dry with paper towel.  Season with little salt and Cajun or Creole seasoning on both sides.  In a large skillet (black iron is the best) heat oil over medium-high heat. (Cook’s Tip: the skillet is hot enough when you flick just a little water with a finger into the pan and it sizzles.) Add pompano, skin side up; cook until lightly golden brown and the skin has crisped.  As in the case of cooking most fish, once you see the bottom half of the fillet turning opaque in color, you can flip it.

Crabmeat can be purchased through LouisianaDirectSeafoodShop.com.