I’ve had the pleasure of meeting Timmie and Lonnie Melancon twice now at the Delcambre Seafood and Farmers Market. On my walk-throughs, they consistently have the busiest booth. As busy as they were, they always make time for a quick smile and hello between customers. I admired their passion, knowledge, and customer service, including how Timala would personally sign each book for children. Today, I messaged her to arrange a call to discuss the history of their business and she appreciatively agreed to speak with me after her shift as a volunteer and board member at the Kaplan Food Bank. I’m immediately even more impressed. As we talked, I thoroughly enjoyed their story and suspect anyone will do the same.

Timmie retired after 30 years of teaching Theatre, Public Speaking and English at Kaplan High School. Lonnie was a third generation in his family in the oil field. His grandfather always had honey bees and he always expressed interest. So, about 16-17 years ago, Timmie bought Lonnie a bee suit and a hive for Christmas. She tells how excited he was, despite that she suspected he had a suspicion of the gift and that it was actually no surprise. They quickly went from 1 hive to 10 hives, and now have 150-200 hives. Both retired, they both are now full time beekeepers and proprietors of Wright Honey.

The two truly have a partnership. Lonnie is the “bee expert.” He tends to the bees, hives, and the yards. Timmie does the marketing, labels, and product development. She makes creamed honey in two flavors: cinnamon and pecan; a process that takes five days. She enjoys making beeswax candles. She even wrote her own children’s book: “Marigold the Honeybee.” She explained she was inspired to write the book after years of teaching and being invited back into schools to teach about bees, but not being able to find the perfect book blending fact and fiction. Lonnie challenged her to write her own book. So, she did! And proudly tells that it was illustrated by one of her former students, Shane K. Stelly, a Broadway set designer.

The Melancons aren’t just in it for the honey! They are also interested and invested in apitherapy and attend educational conventions often. Apitherapy is a 6,000 year old practice that dates back to ancient Egypt. It is an alternative health therapy for both a preventive and therapeutic treatment for disease. that utilizes products from honey bees (honey, honeycomb, jelly, and venom.) Studies indicate that apitherapy may help with allergies, joint pain, wounds and even burns. Lonnie has personally benefited from this treatment, and helped his son’s shoulder.

Timmie’s favorite part of the job is making candles. She enjoys retreating to the shed with a glass of wine in the evenings to create them. The process is a labor of love. After they harvest the honey, they save and wash the wax that she makes candles with. One of her sons, a police officer, made her a customized shelf with holes to wick her candles and she often shows his handy-work at conventions. She explains the candles sell out quickly, and that there are two types of customers: those that enjoy the aesthetic of the honeycomb candle, and those that value the air-purifying benefits from its ionizing particles.

As far as product development goes, Timmie is developing a new honey-lemon lollipop. The lollipop is intended as a “sucker” for children and adults with a cough or can be stirred into hot tea as a sweetener and flavoring additive. The lollipops will whimsically be bee-shaped and are expected to roll out in October this year.

When Timmie isn’t working, she still follows her passion of theatre, participating in the Iberia Parish Arts League (IPAL.) Her first performance was “The Best Little Whorehouse in Texas” where she laughingly tells that she played one of the women that shut down the whorehouse. Her most recent play was the “Cat on a Hot Tin Roof.” Timmie is also working on a screenplay about her uncle. (Her mother, from Rozwell, had eleven siblings.) Timmie’s uncle was serving in World War II, and tragically passed away in an explosion as a POW in a Tokyo prison. She hopes to highlight his story and the service he provided our country in a future screenplay.

Timmie and Lonnie are also proud of their family. They raised four well-rounded, successful boys. Two of which are police officers (one of which made her creative candle-wicking shelf and the other you will often see helping at the farmers markets.) Another followed in Lonnie’s footsteps and is the 4th generation oil field worker as a helicopter pilot for PHI. The last is country singer/songwriter Rod Gator. He had a recent article in Rolling Stone Magazine & is on tour the next few months. You can see his show locally at the Vermilionville Performance Center on September 16th at 7:30pm.

The Melancons have been participating in the Delcambre Seafood and Farmers Market for 6 years. The Delcambre Market is their favorite because of its organization, professionalism, turnout, and support.. They also participate one other Saturday a month at the Abbeville Farmers Market. Come see them this Saturday, September 4th at the Delcambre Seafood and Farmers Market for honey, creamed honey, honeycomb, and pick up a book for your children or grand-children. You may also purchase their products online at https://wrighthoney.com. 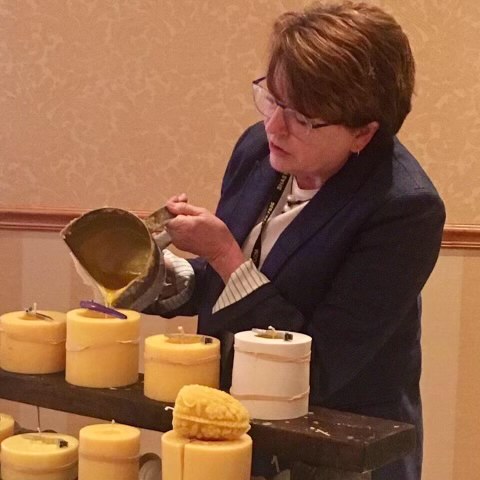 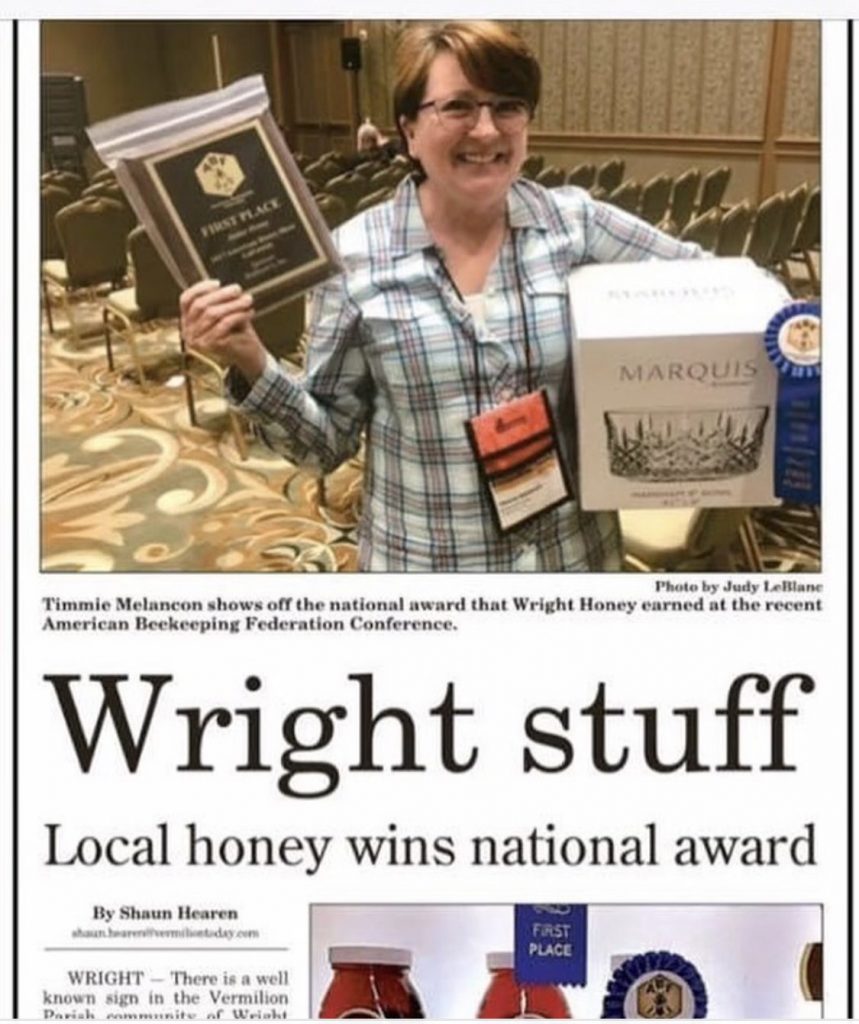 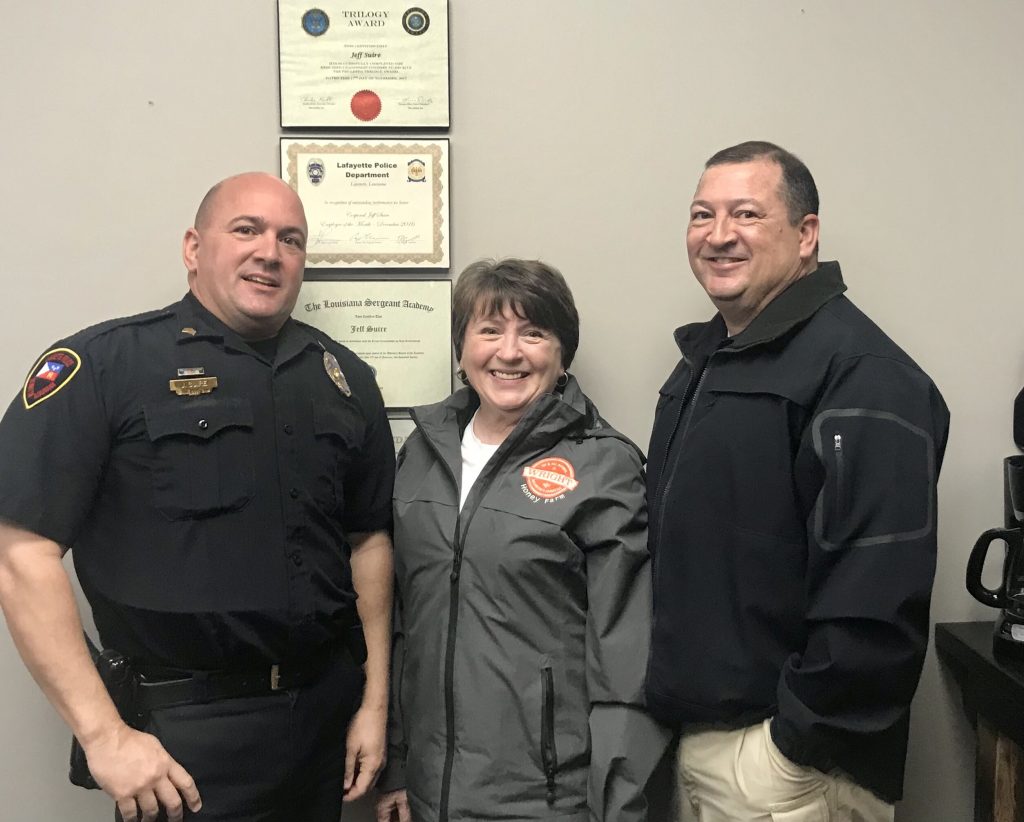 Timmie and her sons that serve as police officers.