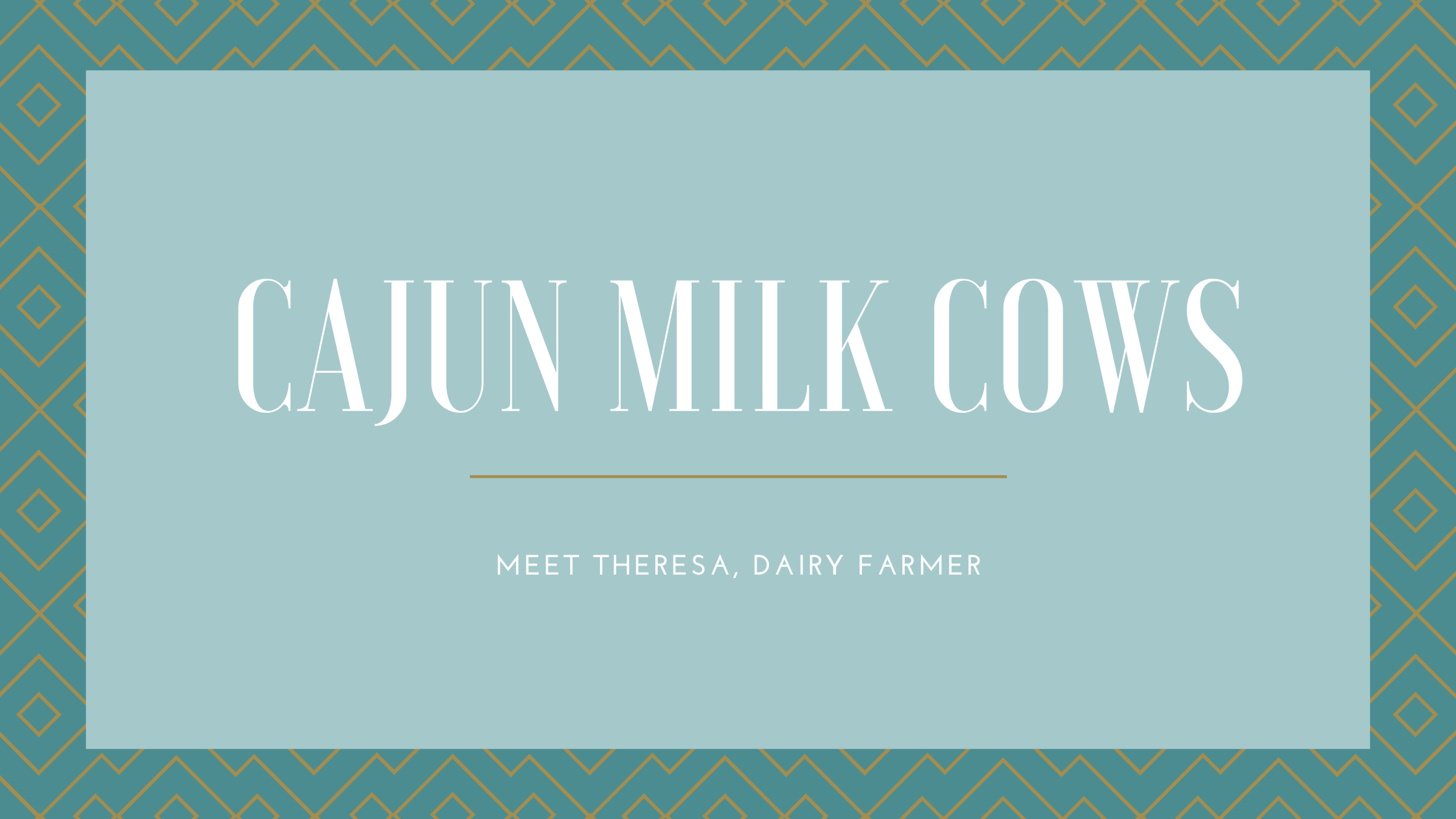 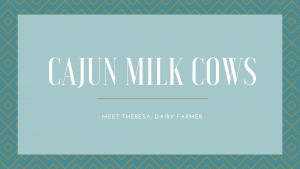 Meet Theresa, an extremely knowledgeable, and the most passionate Dairy Farmer you’ll ever meet. Theresa became interested in dairy when she was in the US Air Force attending Communication schooling in Israel, and brought those skills back home with her.

Her husband bought their farm in 1998. At that time, she would milk cattle for other dairy farmers & 4H. In 2001 she purchased her very own first cow.

Average dairy cattle retire after 3 to 4 years. Her cattle last longer because they are homesteaded. She retires her cows from dairy at age 11-15. Once a cow retires (& 95% of bulls) they go “freezer camp” (her wording for humane butchering.) The last cow she put down was Daisy. She kept her for three years after she stopped producing milk, because Daisy would nanny the baby cows teaching them what to eat and where not to go. Ultimately, she eventually had to make the hard decision to let her go for butchering.

Intrigued, I ask whether retired dairy cattle, bulls, taste different than cattle raised for beef production. Theresa explains, that although she doesn’t eat meat, that her family doesn’t find a difference in the meat. She points out though that Guernsey cows are known for higher yellow fat content. Contrary to what one might think, the yellow is not actually a sign of a less nutritious fat. Instead, the yellow coloring is from beta carotene; Guernsey cows having the highest beta carotene content. Beta carotene is orange/red pigment (think carrots) that is converted to Vitamin A, making it a much more nutritious dairy product.

She presently raises both Jersey & Guernsey Minis. In addition to the nutritional benefits of grass fed cows, another benefit is health safety. Grain fed cows have a more nutrient-dense diet. The grain ferments in their digestive tract, making it more acidic. This increase in acidity makes the cow more susceptible to contracting E. coli or becoming a lifelong carrier. If the fecal matter containing E. coli  contaminates meat at slaughter houses or fruits & vegetables in a garden, humans can contract E. coli also. E. coli can cause diarrhea, urinary tract infections, respiratory illness and pneumonia, and other illnesses.

Theresa has raised all 5 of her children on dairy. She was happy to say her children had very few dental cavities, and that her own personal DEXA scan is as healthy as a woman 30 years younger. When her children were growing, she would give them full fat milk (which is about 5% fat.) She states now the kids are all grown and it’s just her and her husband, they skim the milk. Her mini cows produce on average 3 gallons per day. She uses this milk to make yogurt (she feeds the chickens & dogs), she makes a simple mozzarella-like cheese with milk and vinegar, and makes butter by shaking or blending the milk until it creams.

Theresa takes excellent care of cows.  She tests her cows yearly for 11 bloodborne pathogens, and monthly checks coliforms through LSU Ag Dairy Dept, and daily tests their milk for high somatic cell count. If the cell count is high, the milk is tossed and sent for further testing.

Theresa  states her pet peeve in the dairy industry is that the gold standard should be preventative testing and maintaining disease-free cattle. She explains that humans can be exposed to these same pathogens, and thus the importance of testing and removing sick cattle from the herd, not just pasteurizing the milk. Of the eleven bloodborne pathogens, she explains that only six can affect milk or dairy, but the others can still affect the life and health of the cattle.

She goes on to explain that certain pathogens can survive pasteurization. Johnes (pronounced yo-knees) is a Mycobacterium that is cousin to what causes tuberculosis. . In order for the Mycobacterium to be radicated in milk it has to undergo ultra-high pasteurization, which is like normal pasteurization but with pressure, higher heat and for a shorter amount of time. The CDC estimates that three million Americans have IBD or Crohn’s disease. Theresa points out that scarily enough, Johnes has the same symptoms in cows as humans and that those symptoms are similar to that of IBD & Crohn’s disease.

Theresa farms raw milk, but does not sell milk or dairy products. She explains that in the state of Louisiana milk has to be Grade “A” and pasteurized. She holds much conviction about raw milk & has done much personal study. She explains that many consume raw milk as a lifestyle. In Louisiana however, raw milk consumers are crossing state lines to purchase in Texas or Mississippi where they are purchasing raw milk at prices upwards of $12 to $15 dollars per gallon.

She believes the legislation in Louisiana is not stopping the consumption of raw milk, instead the state is only losing revenue. Louisiana is 1 of 5 states where the sale of raw milk is not permitted.  She plans to present her findings next year to help evolve dairy legislation in Louisiana next year. She further explains that if raw milk does become legal that it will probably adopt testing requirements similar to other states. For example Texas, requires coliform testing monthly. She re-emphasizes that testing should be the gold standard of dairy and why she tests her dairy cattle daily.

Theresa is Owner & Dairy Farmer of Cajun Milk Cows. You can find her on facebook.com/cajunmilkcows